Maptitude territory software gives you a suite of tools useful for creating territories for your business mapping needs.

Often a territory is an area that is made up of several smaller areas merged together. For example, sales territories or market areas in New Zealand might be made up of groups of postcodes, suburbs, or other regions. Maptitude has a territory mapper wizard that can build the territories for you and compute the attributes and demographics of each one.

Unlike many other mapping and GIS software packages that require users to purchase data separately, Maptitude is a professional territory map creator that includes extensive New Zealand geographic and demographic data so that you can get started creating territories as soon as you install the software.

Maptitude New Zealand sales territory map software can map territories that are balanced by sales, customers, population, or other values. Group together smaller areas, such as postcodes or territorial authorities, with your data attached. 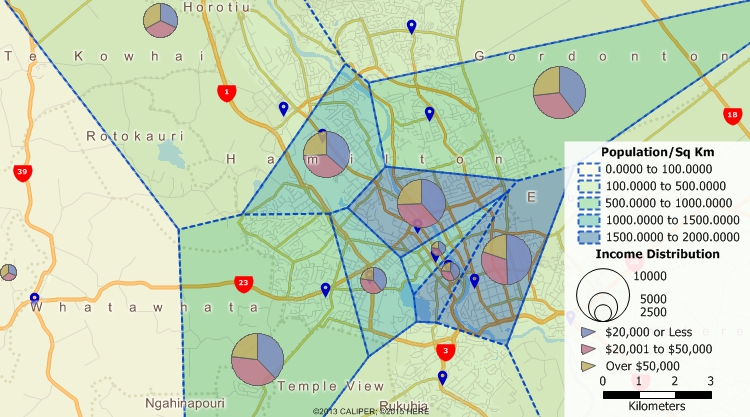 Caliper has partitioning and clustering tools for automatically creating territories. These territories can be balanced so that they contain equal numbers of customers, sales, population, or any other value. The automatic territory creation tools are available free with the latest version of Maptitude. Please contact Caliper Sales at +1 617-527-4700 or sales@caliper.com for more information.