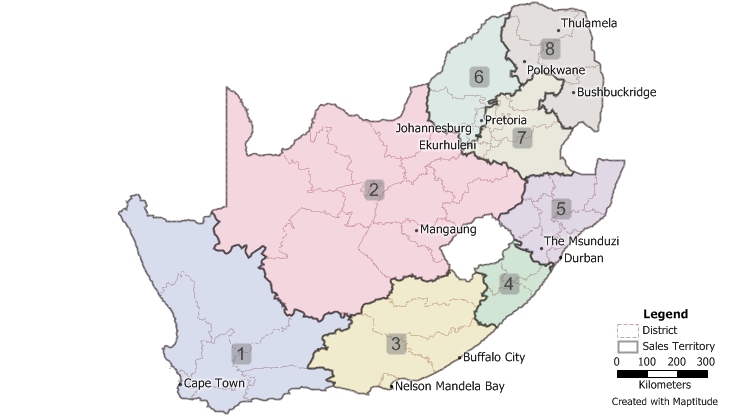 Maptitude South Africa sales territory map software can map territories that are balanced by sales, customers, population, or other values. Group together smaller areas, such as postcodes or suburbs, with your data attached.

A Wizard for importing your region, county, or postal data directly into a new territory layer
A "merge-by-value" utility that uses a field already in a table as the basis for creating territories. The areas, such as postal zones, are grouped based on a field that contains the territory codes. The tool automatically computes the attributes of the new areas using any number of additional fields. This tool can also create your territories based on data filters and queries. Further, the territories you create can overlap in as many places as required and can be visualised using an "edge" style.

Maptitude sales area mapping software allows you to create overlapping territories and visualise them with an "edge-based" colour theme. 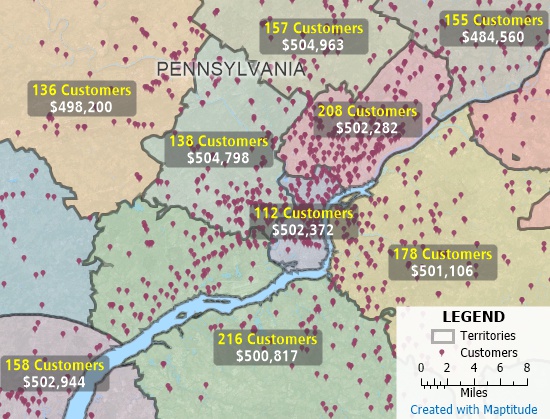 Sales territory mapping by postal code. Group together postal codes to make territories that are balanced by sales, customers, population, or other values with Maptitude territory optimisation software.

A street-based territory tool that provides advanced zone creation capabilities
You can create territories around locations based on the time or distance it takes to travel along roads. Such territories can be weighted by the size of the facility, the number of clients, or the amount of revenue, ensuring that the most successful locations dominate smaller ones proportionately. This tool also allows the complete assignment of a market to your list of locations, allowing your probable market coverage, for example, to be easily visualised by sales representatives.

Example: One of the big issues you face, especially if you are in the franchise industry, is providing fair and balanced "protected" territories. You want to maximise market potential while avoiding cannibalizing the sales of an existing location. But you may also need to establish such boundaries clearly, to adhere to the legalities of a sales or franchise agreement. Maptitude allows you to track and balance as many territory characteristics as you want, allowing you to better establish, justify, and defend profitable territories. 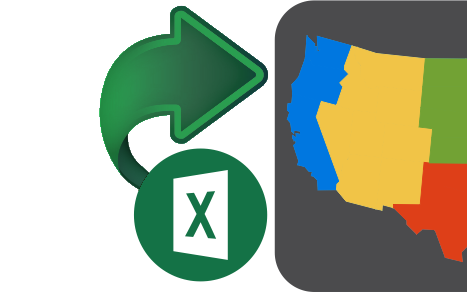 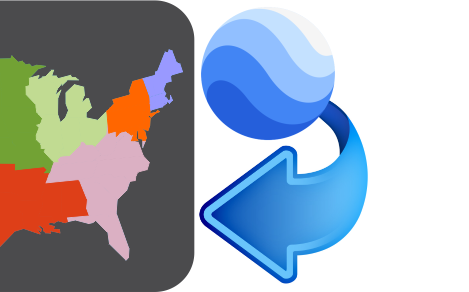