What Are Some Principles That Are Important in Redistricting?

As a person participating in redistricting, it is important to have a bit of background on the laws and principles that govern the process. While it may be impossible to have a plan that is fair across all dimensions and according to all viewpoints, there are some universal principles that should be followed, bearing in mind your own objectives may be more nuanced.

As stated above, a fundamental goal of redistricting is to create balanced districts in terms of total population. This is an essential aspect of fairness and equal representation of each person. For Congressional districts, balance needs to be as exact as possible, so districts cannot differ by more than one person. For state and local districts, a much wider tolerance may apply and could even be as high as a +- 5% difference.

In every districting problem, there will be a “target” or ideal number of people per district. This is calculated by dividing the total population of the area to be districted by the desired number of districts or representatives.

One may wonder why the ideal value is based on the total population as opposed to the number of citizens or the number of voters. Although those unable to vote, including non-citizens and children, are included in the population, federal funds are apportioned based on population, not voters.

An accurate head count is essential in ensuring fair districting. If people do not respond to the Census or are excluded from it, equal representation will not be possible. In some states, prisoner populations are counted at the prison locations and in other states prisoners are re-allocated to their former place of residence.

The population is always changing. While, in general, population in the U.S. is growing, there are states, regions, and towns where it declines. Shifting population totals lead to a requirement to redistrict – to redraw existing district boundaries - to ensure equal representation.

In some local jurisdictions, balance can be obtained using measures that are different from total population, such as voting age population.4  It is important to understand what the expected goal is in each redistricting effort.

Federal law prohibitions of racial discrimination in voting rights applies to redistricting. The Equal Protection Clause of the 14th Amendment prohibits states from denying anyone, regardless of race, equal protection under the law.5 As applied to redistricting, this amendment prohibits those drawing the maps from separating people into different voting districts due to race.6 The Voting Rights Act of 1965 ("VRA") also prohibits racial discrimination in voting. Section 2 of the VRA prohibits the denial of voting rights due to failure to pass a literacy test7 as well as "vote dilution," in which the strength or effectiveness of a person's vote is diminished8  based on race, color, or language spoken.

There are instances in which the votes of minority populations have been reduced in influence through use of at-large districts or by "cracking," "packing," "stacking," or “fracking” districts. In an at-large election, all representatives are elected by the entire voting constituency. As a result, minority populations may have difficulty in electing their candidate of choice. Some states, such as California, have prohibited at-large elections in political subdivisions if they would impair the ability of a protected class to elect candidates of its choice.

Cracking of high minority population districts dilutes minority votes by breaking up a contiguous district that is composed of a majority of a racial or ethnic minority. Conversely, packing reduces minority voting power by cramming minority group members into a single district when that group may be able to produce a majority share of votes in more than one district. Fracking occurs when a county, city, or other well-established political subunit is purposely split in two or more discontiguous parts of the same district. Fracking is another method by which minorities can be packed into a single, albeit not highly compact district.

Stacking involves betting on low voter turnout of low-income, relatively less-educated minorities by combining them in a single district with wealthier, more educated white voters who will have a voting majority due to higher registration rates and voting turnout.

Minority coalition districts are another mechanism for improving minority representation. Minority coalitions districts are those that combine multiple minority groups to create a majority-minority district. Although different minority groups sometimes share views on various political issues, this is not always the case. In areas where one minority is well established, that group can be resistant to supporting new immigrant groups. Blacks and Latinos do sometimes vote similarly but their votes may depend on specific issues. Moreover, research has shown that Latinos have joined with blacks to vote for a black candidate, but the reverse occurs less frequently. In fact, whites sometimes ally with blacks to oppose Latino candidates. Endorsements by influential leaders are often significant.10

Assessment of the potential for minority coalitions will often be an inherently local matter. As such local knowledge and insight and evidence from prior elections can be pivotal in assessing the potential for such alliances.

There has been disagreement in the courts over the ability of minority coalitions to challenge the legality of redistricting plans under Section 2 of the VRA. Critics of aggregation argue that each protected group much make the claim of vote dilution separately, stating that the coalitions are a major departure from the intent of the VRA. Proponents of coalitions argue that nothing in the VRA prohibits them, and they are aligned with the VRA’s purpose of prohibiting racial discrimination.

To successfully make the case for vote dilution in court, the combined group must be sufficiently large and geographically compact to constitute a majority in the district. It must be shown that the group votes similarly. And it must be demonstrated that a white majority of votes would tend to defeat the combined group barring special circumstances.11

In general, compact districts are to be preferred over those with very irregular shapes. Districts that are not compact are easy to spot on a map. They are irregularly shaped and may indicate intent to discriminate against a group by packing them into a particular district. In general, higher levels of compactness are encouraged. Various metrics have been developed to measure compactness. However, the simple “eyeball test” is also a frequently used measure. Compactness is technically defined as having the minimum distance between all the parts of a district. (a circle, square or a hexagon are examples of very compact districts). In MORe, Reock compactness scores are provided as a metric. A Reock score is calculated by dividing the area of the district by the area of the smallest circle that would completely enclose it. This value will always be between zero and one because the In this example of Congressional Districts in Texas, District 8 is relatively compact, while District 15 is not. area of the circle will always be larger than the area of the district. The closer a Reock score is to 1, the more compact the district. 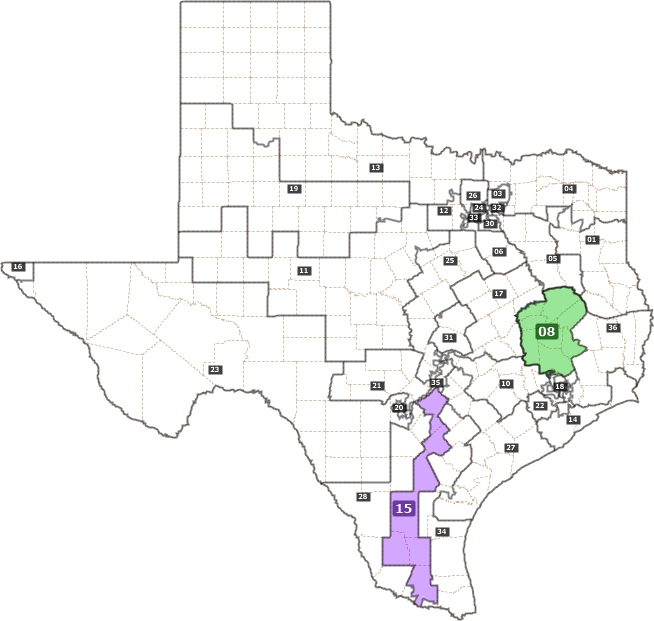 A portion of District 18 was added to District 7 to provide an example of a non-contiguous district. Contiguity is defined as all parts of a district being connected geographically with the rest of the district. You can generally spot a non-contiguous district by noting that it is in several separated areas and not in one piece. Another definition encountered is that of “travel contiguity,” which is defined as being able to travel from any point in a district to any other point in the district without having to leave the district. This can be assessed with tools provided in the desktop Maptitude for Redistricting.

In some cases, contiguity requirements allow bodies of water to sit between two parts of the same district. For example, in Hawaii, districts include more than one island, and are considered contiguous. In other instances, water cannot divide a district for that district to be considered contiguous. Whether a single point connecting two pieces of a district (i.e., point contiguity) is sufficient may depend on state or local guidelines.

Contiguity can be thwarted by political jurisdictions that are themselves in multiple, separated areas due to annexation. In these situations, it may not be possible for all districts to be contiguous. 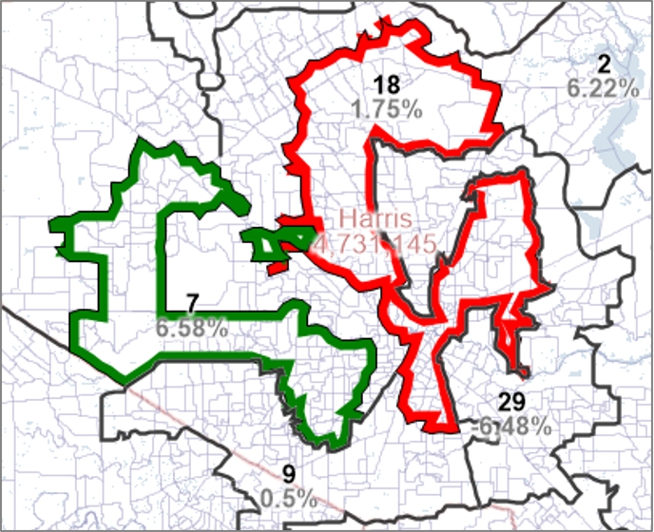 A portion of District 18 was added to District 7 to provide an example of a non-contiguous district.

States often have the goal of keeping counties and other smaller political subdivisions, such as cities and towns, together when redistricting. This measure can be quantified by counting the number of counties or other subdivisions that are spit between two or more districts.12 Also, nesting is sometimes required as a matter of state law. Nesting is the practice of using the boundaries of districts for one elected body such as the senate to bound the more numerous, smaller house districts of the state legislature. In county redistricting, keeping towns intact, when possible, may apply.

4.    Preservation of Communities of Interest (COI)

In addition to keeping political subdivisions intact, map drawers are sometimes encouraged to keep groups together that may have similar positions on issues and are likely to vote similarly. These communities of interest, COIs, do not necessarily coincide with the boundaries of a political subdivision but may include neighborhoods of a city or regions of a state where the residents have common demographic characteristics and/or shared political interests.13 COIs are particularly important for groups that have traditionally been left out of or are underrepresented in the political process. Without preserving COIs, policymakers may fail to hear the concerns of these groups. Examples may include neighborhood residents organizing around issues, such as having a school built closer to their area or a nearby coal-fired power plant closed. Race and ethnicity can play a role in defining a COI but cannot be the sole identifier. Importantly, to be valid, a COI’s shared interests should have a meaningful relationship to the entity to be redistricted. For example, shared interests about educational policy are relevant to school districting, but not likely to be relevant in drawing water districts.

Creating COI is not an exact science and creating them can be in direct conflict with other redistricting principles such as compactness and keeping political subdivisions intact. Multiple methods for defining COIs more consistently have been identified. Preventing districts from dividing census tracts, which could act as a proxy for COIs, as they tend to contain groups that have similar demographics, is one idea. However, similar demographics do not ensure shared views on diverse issues. Others have suggested requiring the use of public testimony to define COIs. Persuasive explanations of a community of interest should be provided to support their use.

California has provided the public access to a COI Tool: https://www.oc-breeze.com/2021/03/03/194416_2020-california-citizens-redistricting-commission-launches-communities-of-interest-tool/ Along with the ability to submit a map of your COI, the user is prompted to provide qualitative information, such as community name, shared interests, and nearby areas to exclude or exclude. Submissions are anonymous.

Some states require that those drawing the lines not place incumbents in the same district, so they are forced to run against each other in a newly created district.

Some states require that district boundaries be drawn in a way to encourage interparty competitiveness. A simple way to determine whether a district is competitive from this perspective would be to tabulate voter registration data. Here too, voting participation may also be relevant.

8.    Prohibition of Use of Political Data

9.    Not Favoring Political Parties or Incumbents

Whether a redistricting plan is neutral with respect to political parties or incumbents can be hotly debated. Florida’s constitution, for example, contains this language, but does not prohibit use of political data.

These principles and associated tests have been created to discourage gerrymandering practices, that is manipulating district lines to maintain or obtain partisan political power. It is impossible to adhere perfectly to all these principles. So, some must be prioritized over others. Sometimes, one principle may be in direct conflict with another. After legal requirements are met, there need not be any prioritization of principles and the political process may govern outcomes.