For the majority of Maptitude for Redistricting users, installing the software is straightforward and should be done automatically after download. However, there are occasionally problems and this article goes over identifying those problems and ways to solve them.

The common issues break out into three main categories: The below sections talk about how to identify these issues and what to do about them. Corrupted Installation Files Maptitude for Redistricting is installed by downloading the files to a separate download folder and running the installation from there. Sometimes, an overactive antivirus can flag these files and delete or change some of them. This can result in the failure of the installation.

Antivirus issues are discussed in their own article: Antivirus and Firewall Issues

Insufficient User Privileges A lot of organizations limit the changes a user can make to their own computer as a security provision. They do this by only allowing certain privileges to certain users and a common setup is to limit installation privileges to an administrator account. If you try to install the software but your user account was not set up to allow this you will receive an error message indicating that you do not have the correct privileges, such as the below: 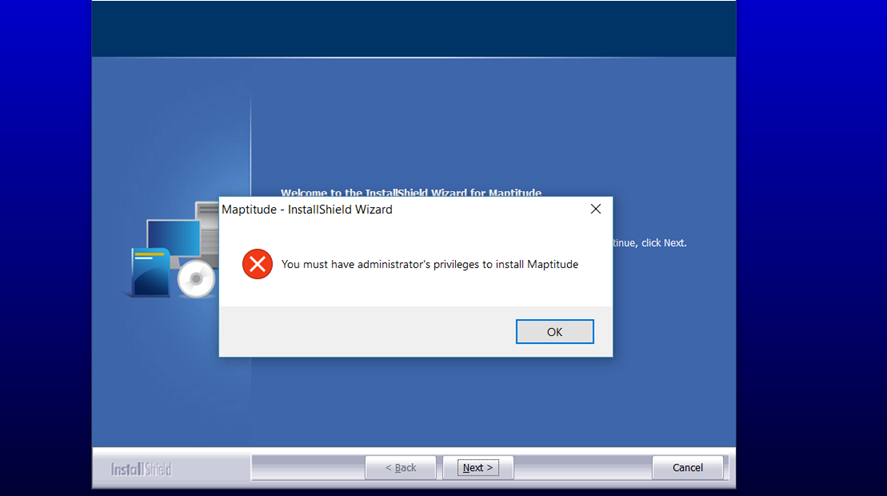 The fix for this will depend entirely on how your IT infrastructure is set up so we suggest contacting your IT administrator about this. Installing onto a Mac If you try to install Maptitude for Redistricting directly onto your Mac while running an Apple OS you will not be able to. Maptitude for Redistricting is a Windows software, but it can still be installed on a Mac if you run Windows virtualization software. Most Macs purchased in the last several years will have an Intel CPU, and you can use virtualization software such as VMWare Fusion or Parallels Desktop to run Windows, or indeed you can also boot up your machine natively in Windows using Apple's Boot Camp software. Any of these solutions works very well for running Maptitude for Redistricting. With any of these options you would need to have a Microsoft Windows license. Apple's Boot Camp is free with the Mac OS, but VMWare and Parallels are commercial products. No Country Package was installed with the software If you get the below error saying that no Country Package was installed with the software, you can find help for this in its own article here. 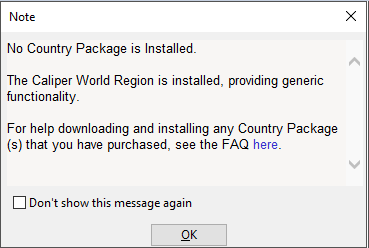 Installing on a 32-bit machine