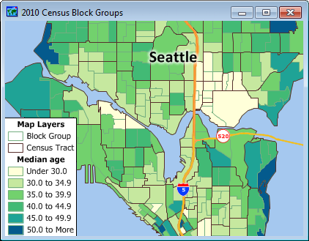 The 2010 U.S. Census Block Groups Data Disc is packed with information about the US population and is essential for making accurate location-based decisions. The product has been updated to reflect the latest 2010 boundaries and US data.

You will be able to answer questions such as "How many potential customers live within half a mile of my store?" or "In which location should we expand our market?"

Included are 2010 Census counts for 147 fields that include total population, age, gender, race and ethnicity, and also total housing units broken down by whether they are vacant or occupied. The price is US$250 and it is available online at the Caliper Store.