Unlike a general-purpose GIS, Maptitude for Redistricting streamlines the plan creation process for all types of political boundary definitions and provides all of the calculations and reports that redistricters want and need. It is the ideal tool for congressional redistricting as well as for all forms of local applications ranging from state legislative districts to city council and local school board districts.

As a user adjusts the boundaries of districts, Maptitude for Redistricting instantly reports and visualizes the consequences of these actions in terms of population balance and demographic and political composition. Districts can be drawn to consider numerous factors that could include race, communities of interest, majority-minority districts, political party registrations and voting outcomes, district compactness, and the location of incumbents’ residences. Compatibility with a wide array of data formats facilitates incorporation of both public and private data in the redistricting process.

As redistricters prepare for the start of this decade’s redistricting cycle with the imminent publication of the 2020 Census, they will have access to a host of cutting-edge features in Maptitude for Redistricting 2021 that are not found in any other software. The new tools include an improved Disaggregation-Aggregation Wizard, tools to specify majority-minority districts, new ensemble and majority-minority reports, a plan integrity tool that checks whether incumbents have been moved out of their districts, and extended capabilities for the communities-of-interest tool.

It can be a great challenge to deal with hundreds of plan alternatives, including those developed by the public. Maptitude for Redistricting also includes extensive tools for organizing and comparing alternative plans. Districts drawn in any manner can be evaluated for fairness in representation and the presence of racial and political gerrymanders.

Caliper has also developed a companion web tool, Maptitude for Online Redistricting, that is the ultimate solution for providing public access and participation in the redistricting process.

Designed with the help of redistricting professionals, Maptitude for Redistricting is easy to learn and use. It is used by a majority of state legislatures, both national political parties, independent commissions, many cities and counties, and numerous public interest groups. 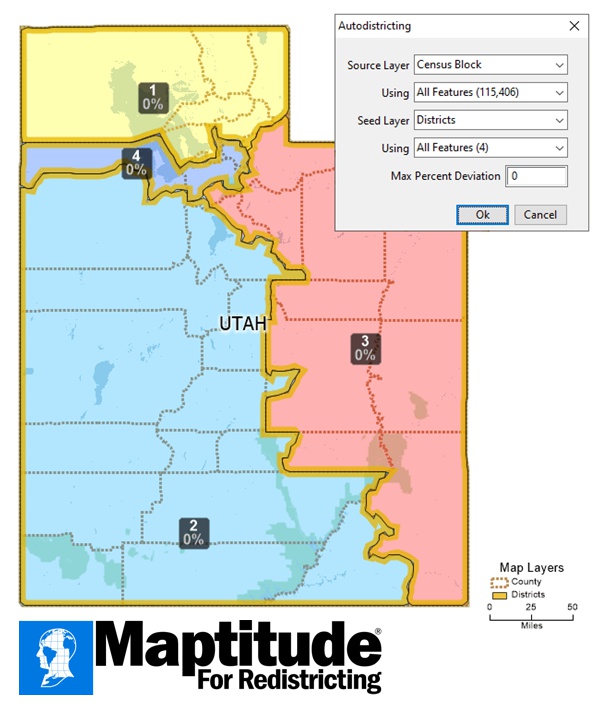 About Maptitude for Redistricting