As population growth and changes led to an imbalance in the workloads of police districts in the San Francisco Area, the San Francisco Police Department (SFPD) needed to redraw the police districts, taking into account a large amount of data, such as the number of calls for service, number of incidents, response time, population, and the location of key infrastructure. Additionally, the SFPD was building a new police station in a district that already had a facility. To facilitate this process, the SFPD hired the Public Safety Strategies Group LLC. PSSG used Maptitude to quickly evaluate any proposed changes to the boundaries.

In 2013, construction began on a new Southern District Police Station that was located outside of its current district. This, along with population change, uneven workloads, and a city requirement for police district boundary review every ten years, meant that the SFPD needed to redraw their district boundaries.

A police district is an area that is made up of several smaller areas that are grouped together for patrol purposes. For example, neighborhoods or parcels might be grouped together to create a cohesive area for patrolling. The key objectives of the new district alignment were to:

The SFPD had a large amount of internal and external data to consider when creating the new district boundaries. Using focus groups, PSSG identified five variables from police datasets (calls for service, incidents, staffing, response time, and call loading) and five variables from external datasets (neighborhood districts, geographic barriers, Census data, housing inventory, and development pipeline) that were most relevant to the boundary analysis. Each proposed map was analyzed with respect to how it changed the values of these key variables for each district. 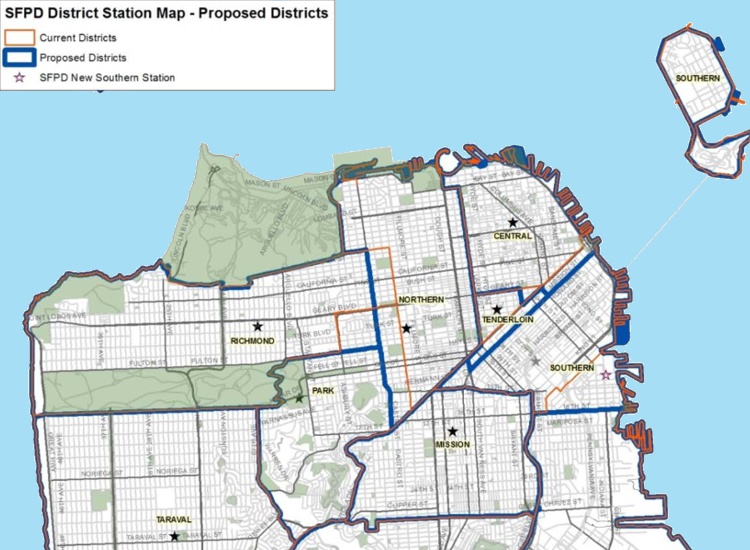 PSSG used Maptitude as part of its solution. This allowed the SFPD to efficiently unify their area-based data and to display that information in a series of maps. The Maptitude solution supported quick and easy district management, allowing the SFPD to instantly see how any proposed changes to the boundaries affected the values of the selected variables. The territory tools in Maptitude made it easy to draw several proposed versions of the boundary map and present each in a form that could be quickly and efficiently evaluated by decision makers.

Maptitude mapping software enabled PSSG to support the SFPD with the suite of tools they needed to quickly draw proposed boundary maps and to isolate the differences between the many choices. Maptitude can build the districts and compute the imported attributes of each one, helping police departments determine the optimal districts for police deployment. In addition, Maptitude maps are easily shared with stakeholders in a professional and comprehendible format.