Caliper Offers Updated Canada Data for Use with Maptitude 2013

NEWTON, MASSACHUSETTS (USA) - Caliper is excited to announce a new Canada Data Package! The product includes a wealth of data and functionality not available in any other software.

The Canada data includes an up-to-date street layer with address data for geocoding and travel time information for computing routes and travel-time rings. Also included are building footprints for many urban locations, railroads, and comprehensive named landmarks that range from public facilities to commercial buildings including shops, restaurants, and retail stores.

You can now switch between the countries you have purchased. Doing so refreshes the Maptitude interface with country-specific tools such as those for finding, pin mapping (geocoding), routing, and the Create-a-Map Wizard. 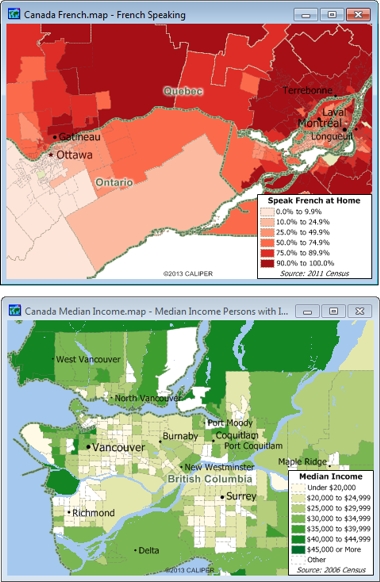