The United States Census Bureau required a complete address list in order to collect a questionnaire from every address. To support the 2010 Census, the Census Bureau implemented a Maptitude-based solution, named MAF/TIGER Partnership Software (MTPS). 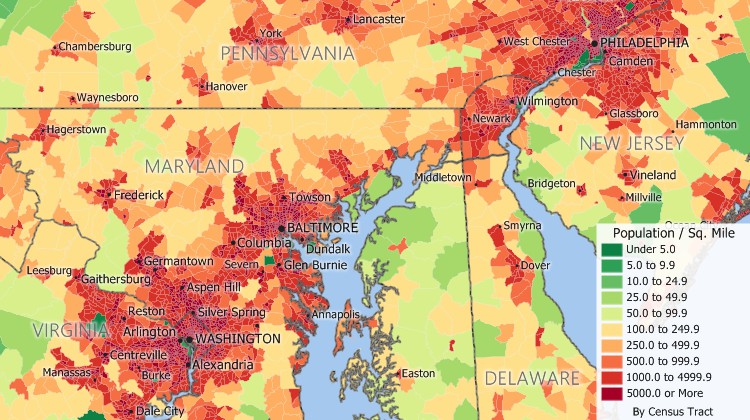 To support the 2010 Census, the Census Bureau implemented a Maptitude-based solution, named MAF/TIGER Partnership Software, which combined the Census address lists (Master Address File or “MAF”) and nationwide digital maps (the "TIGER" map ) in a single software package to ensure an accurate decennial Census for our communities.

Over 40,000 state, local, and tribal governments had access to this software, to make updates that were essential for the success of the 2010 decennial population Census. Many subsequent activities depend on this process, such as congressional, state legislative and local redistricting, the allocation of federal funds to local and state governments, and the publishing of Census data.

Two Maptitude web apps were also released that enabled Census Bureau staff and program participants to use Internet browsers and mobile devices to validate and revise geographic updates and jurisdictional boundaries. These applications were particularly useful to agencies that were using paper maps and did not have existing digital data or the ability to install software locally.

Caliper developed additional software for the Census Bureau to be used by Metropolitan Planning Organizations (MPOs) and State Departments of Transportation (DOTs) to define traffic analysis zones (TAZs) based on Census geography. The software implements the TAZ Delineation Business rules that were prepared by the Census Bureau’s Geography Division, the Federal Highway Administration (FHWA), and the American Association of State Highway and Transportation Officials (AASHTO). The MPOs and the state DOTs can define, review, verify, and correct traffic boundaries. This new geographic layer will then be added to the Census Bureau's TIGER file, and the TAZ definitions will be used for the CTPP 5-year tabulation and to model future planning scenarios.

There are a number of reasons correct Census data are important to you. Census data are used not only to apportion seats in the House of Representatives but also to appropriate federal monies in over 1000 programs administered by 26 federal agencies. Most of the funds for these programs are distributed by formulas that use Census data such as total population, population by age group, gender, income, and housing characteristics. For instance, the 2010 numbers are used to decide how more than $400 billion per year is allocated for infrastructure projects, such as new hospitals and schools, and services like job training centers.

Census data also provides the statistical support for grant applications that fund community social, economic, and environmental programs as well as other community improvements and enhancements. Census data helps your town to plan for future needs. For example, if Census data reveals that your community has a growing number of individuals nearing retirement age, you may have a future need for more assisted living options.

The Maptitude-based solution enabled the Census Bureau to meet a number of additional specific goals such as reducing or eliminating the production, shipping, and handling of paper maps; making participation more convenient; reducing processing cycle time; and improving the accuracy of the Census geographic databases.

The TAZs generated with the Maptitude-based solution are critical to the transportation planning process. These traffic zones are used to model future planning scenarios that shape an area's economic health such as land use, air quality, urban growth, economic development, safety, and security.

The Census Bureau chose Maptitude to be the basis of its MAF/TIGER Partnership Software. Over 40,000 state, local, and tribal governments had access to this software, to make updates that were essential for the success of the 2010 decennial population Census.