You need the newest maps, the latest demographics, and the fastest, most intuitive Maptitude!
Upgrade or Purchase Now

This release combines several significant enhancements in productivity and high quality output. Finished reports are now accessible via a single click, allowing direct sharing of your geographic analysis. Map backgrounds can be seamlessly switched to show aerial photo-imagery or terrain, adding realistic and relatable elements to your presentations. Maps can now be visualized in a stunning and compelling 3D view. The most exciting features of Maptitude 2014 are showcased below. A complete description of the new features in Maptitude 2014 is available as a PDF.

Maptitude delivers easy-to-use, professional mapping tools at the affordable price of only US$695. Annual (optional) upgrades cost US$395 per user/license. For pricing and ordering information please visit the Mapping Software Store, e-mail Maptitude Sales, or call us at +1 617-527-4700.

Maptitude 2014 ships with a basic global map and one detailed Country Package of your choice. Additional Packages can be purchased separately for only US$595. Each Package includes a wealth of data unavailable in any other product, including an up-to-date street layer with addresses for pin-mapping (geocoding) and travel time information for computing shortest paths and drive-time rings. Also included are building footprints for many urban locations, railways, and comprehensive named landmarks that range from public facilities to commercial buildings including shops, restaurants, and retail stores. Postal data and detailed demographics (where available) are shipped with the product.

New Zealand (NOT YET RELEASED)
An October 2013 HERE® map will be included in the New Zealand Package. For additional information on each Package, including those for countries not mentioned here, please visit the Included Mapping Data page.

In Maptitude 2014 you can now create high quality reports that can be automatically produced when conducting ring and drive-time analyses. The report templates present your demographic and site analyses much more quickly and professionally than was possible in previous versions of the software. You simply choose from your own information or from the wealth of population variables included with Maptitude. This enables you to make better informed location-based decisions using clear and concise results, and saves you from wading through dense database tables. 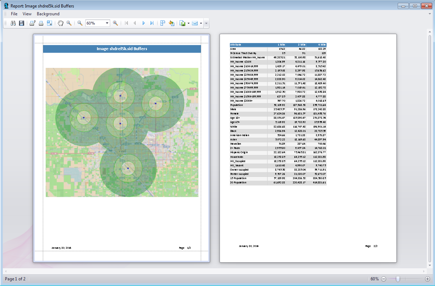 Maptitude 2014 gives you access to aerial, road, terrain, and hybrid map layers that can serve as distinctive backgrounds to your maps. These layers are visually attractive and support a range of tasks including real estate site exploration. 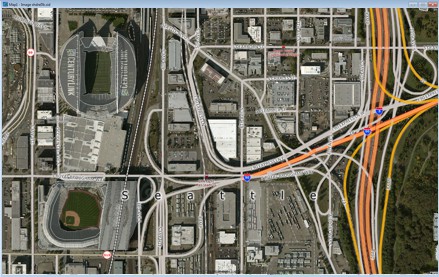 Maptitude 2014 provides completely new 3D capabilities that can be used in any industry or application that requires landscape visualization. The powerful suite of tools allows the user to display, manage, and interpret elevation-based geographic information, and to accurately create, explore, and refine scenarios directly within a 3D environment.

Working seamlessly within Maptitude, the 3D View allows you to map in 3 dimensions as a way of visualizing terrain or as an engaging means of presenting findings to an audience. You can build a 3D scene from the huge number of Maptitude models and any combination of SketchUp, VRML, or 3DS models, such as buildings and landmarks.

There is a revamped Shortest Path toolbox:

Enhancements to the Network Bands tool reinforce its ability to create the most accurate drive-distance travel analysis on the market. Individual streets are accounted for in the calculations of those locations that can be reached within the time or distance specified.

Maptitude includes the United Nations Office for the Coordination of Humanitarian affairs (OCHA) humanitarian icons to help relief workers present emergency and crisis-related information quickly and simply. The set of symbols covers everything from natural disasters, such as tsunamis and earthquakes, to relief supplies, such as water containers and shelter kits.

Click here to see features that were new to Version 2013.