What is Fair Redistricting?

On August 6, 1965, President Johnson signed The Voting Rights Act of 1965 ("the Act"), federal legislation that prohibits racial discrimination in voting. The Act defines certain elements of fair districting from a legal standpoint. Section 2 of the Act forbids deprivation of voting rights for failure to pass a literacy test as well as "vote dilution," under which a person's voting power or usefulness is reduced.1 Fair districting requires the absence of vote dilution.

There are multiple mechanisms through which vote dilution can occur. Vote dilution most commonly occurs when district lines are drawn in a way to push minority communities into a small number of districts (packing) or distribute them widely into a large number of districts (cracking, fracturing, or splitting).2 An at-large election can also dilute the votes of minorities in that all voters are permitted to vote for all seats. This process allows majority voters to override minority interests by voting for representatives consistent with their beliefs.3

To prove that a redistricting plan has diluted minority votes, the Supreme Court has ruled that the following three conditions be met: 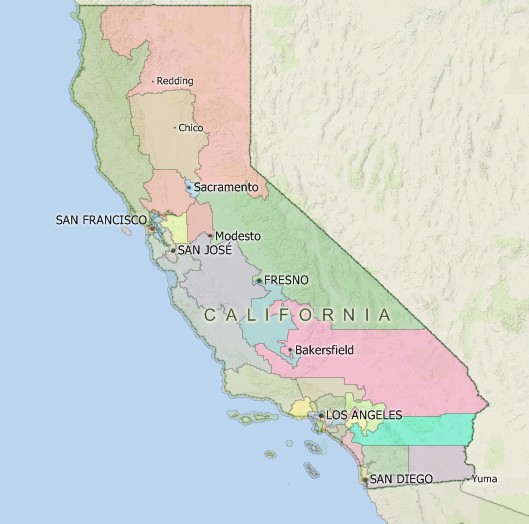 Maptitude provides measures and reports that support the creation of fair and balanced districts. Maptitude is constantly enhanced and provides cutting-edge tools such as the Efficiency Gap Measure, Mean-Median, and Declination for exploring redistricting problems. Maptitude was used to democratize redistricting in California and is used by the majority of redistricters, from independent commissions, non-profits, and civil rights groups, to the courts and political parties.