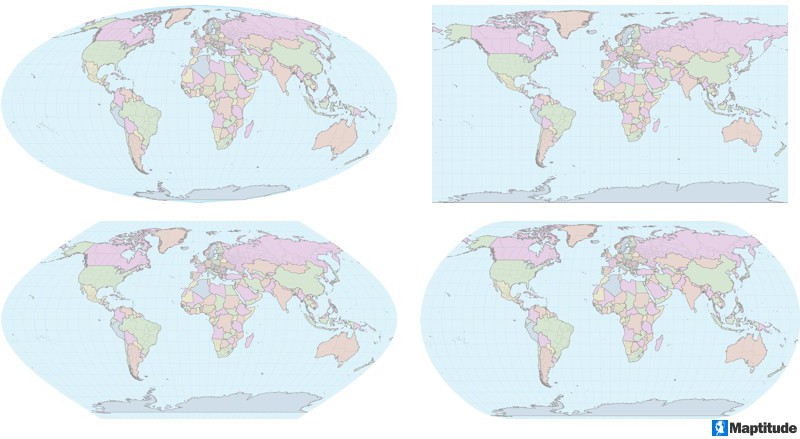 Maptitude supports over 50 file types and more than 100 GIS file and CAD formats ensuring data retention and transferability. Data can be imported, exported, and shared in numerous formats, with built-in support for spatial extract, transform, and load (spatial ETL) operations. Maptitude also includes a library with APIs to automate conversion and reprojection tasks. The solution adheres to all standard Windows conventions, includes context-sensitive help, and comes with detailed manuals for GIS, video tutorials, and an online learning portal. No third-party plugins are required to support common data formats and operations. 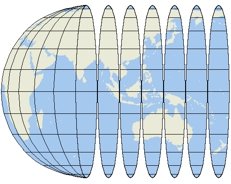 One of the challenges of making maps is to represent the curved surface of the earth on a flat screen or a piece of paper. Map makers through the ages have faced this issue and developed specialized tools for addressing it. First, they developed a common reference system that could be used to identify the location of any point on the surface of the Earth. Then they devised methods for taking points on the curved surface of the earth and "projecting" them onto a flat surface. These methods enable map makers to control the distortion that results from creating a flat map of the round earth.

When you use Maptitude, you don’t really need to know anything about map projections. Maptitude can choose a projection for each map automatically, and change projections as needed when you change the map scale or center. This means that your maps can always use a reasonable projection that shows the area covered by your map in a sensible way. Any time you want to know what projection is being used on a map, simply look in the Map Properties window.

When you turn off automatic projections, you have many choices to make and many different projections from which to choose. When a professional map maker thinks about what projection to use for a particular map, the decision is a complicated one that depends largely on two factors:

Both vector and raster data can be reprojected in Maptitude. If you choose to add a raster layer with a different projection, Maptitude can reproject the image to the same projection as the map.

Learn more about Maptitude to see how you and your team can map the best locations for your business!