Big Brother Knows Where We Live: Share the Location!

The government knows where we live. And, if you live in Australia or Denmark, so does everyone else. While no personal information is included, these two countries have released databases of the location of every single address.

Australia only recently joined the club of countries that have open address point data. Denmark is the other country (let me know in the comments section if you know of any others!) and the Danes have reported a huge return on their investment. When you know where every single address is in a country, the possibilities for geospatial analysis are limitless.

Address data has been set free in Australia because of a shrewd move by the Australian government. Initiatives under the National Innovation and Science Agenda are making public data more available for the benefit of all Australians. With precedent in only a few countries, research indicates that such “open data” initiatives provide significant boosts to the host economy. For example, a study for the UK government estimates that the Ordnance Survey OpenData initiative will deliver a net £13.0 million - £28.5 million increase in GDP in 2016.

We wanted to see how far we could push Maptitude with these data to illustrate how easy it is to work with large amounts of information. A good example of this is calculating the center of a country. One of the primary benefits to users of the Australian data is that they no longer have to pay a premium for nationwide address level geocoding (pin-mapping) and visualization. Using Maptitude we plotted every single Australian address. 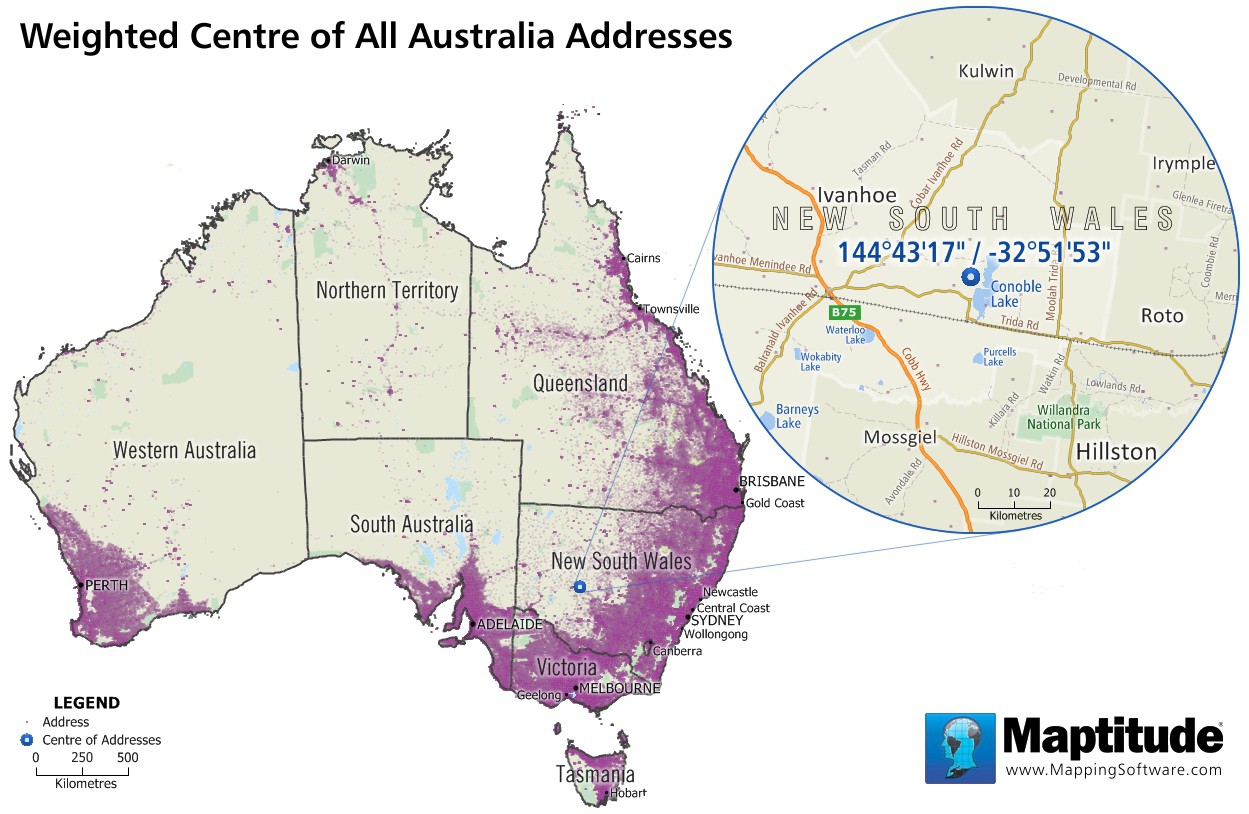 This map shows the weighted center of all of the address points in Australia, which is located near the western shore of Conoble Lake in Ivanhoe, New South Wales.

Next, as an armchair explorer, I thought that I would set out to discover the center of Australia. Unfortunately, real explorers such as Charles Sturt and John McDowall have already done this, so I have satisfied myself with finding the modern center of the country based on the locations of over 14 million current Australian addresses. In a couple of clicks Maptitude shows me that Conoble Lake is at the heart of the country.

The coordinate in the map above (-32.861480, 144.720329) is as dry as the desert landscape in which it is located, so I looked up the what3words location. what3words gives a unique and random 3 word description for every 3m grid on earth, with my coordinate corresponding to “automation.fever.clunk”. A description like “automation.fever.clunk” is obviously much more cutting edge and easier to remember than using boring and lengthy longitude/latitude coordinates, and more befitting of my present day flag in the ground.

By integrating the now freely available Geo-coded National Address File (G-NAF) into Maptitude, the value proposition of the mapping software is even more unassailable and empowers even non-techie users with map aptitude.

Geospatial data, such as streets with associated address range attributes, have long been freely available in the USA. However, the American data is often critiqued for being of low and variable quality and not up to the standards of data from agencies such as the British Ordnance Survey.

In the USA, the Census Bureau is responsible for publishing the national address range data, and census data has been used to define the geographic center of the country since 1918. In reality, the center of a country is open to interpretation with several different proposed centers having been calculated for many countries including the USA and Australia. For example, in the USA a farmstead northeast of Potwin, Kansas, was assigned the rounded geographic center of the contiguous USA (39.8333333,-98.585522 to 38.0000,-97.0000) by the online fraud prevention company MaxMind. Unfortunately, being the default location of 600 million IP addresses resulted in harassment because people incorrectly assumed that the unsuspecting residents were responsible for all sorts of shady cybercriminal practices.

Despite the open access to geospatial data in the USA, the lack of funding hampers the development of critically valuable national datasets. While efforts are underway to create an open address database by organizations such as the U.S. Department of Transportation, this is still in an exploratory phase.

Denmark was the first country to release an open database of geocoded national address locations. Open geospatial data has a broad array of benefits from stimulating economic growth to fighting corruption. For example, reports have shown that those countries leading the Corruption Perception Index also rank at the top of the Open Data Index (correlation is not causation, but these reports do have some interesting findings). According to a 2010 study, the direct financial benefits to Danish society of the open address data for the period 2005-2009 totaled EUR 62 million through improved government capabilities and more efficient service delivery.

Open address data and GIS software such as Maptitude allow analysts to:

When you have direct access to such data for visualization, research and address matching, as you do in Maptitude, then you will be empowered to achieve what would otherwise require a significant investment and a specialized education.

Learn more about Maptitude to see how you and your team can use Maptitude in Data Science and Research Analysis!