Why is my Google Satellite Layer drawing so slowly?

You may have been making a map and used one of the tools under Map>Imagery>... such as the Google Satellite layer. When you zoom or pan around your map, the redraw speed of this layer can be very slow. This article will explain why this happens and what you can do to fix it.

In Google Satellite’s style settings, smoothing is set to 2x2 by default, which lets you see the imagery at a high resolution somewhat zoomed out, but it also makes its drawing extremely slow. If you go into the style settings for that layer and change the smoothing to “None” the imagery will draw much faster, although the image will be fuzzier. Once you want to print you can change these settings back.
Note that Virtual Earth is also set to 2x2 by default, and the same change can be applied to that by choosing “None”. 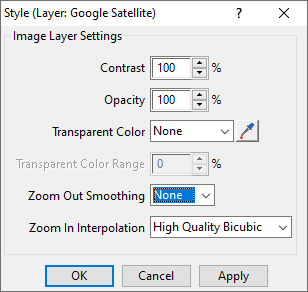