Maptitude is a robust and easy-to-use professional health care mapping tool. Maptitude provides all the features that your organization requires in order to take advantage of the geographic elements underpinning successful health care networks and medical services provision.

Maptitude costs only US$695 and is packaged as a one-stop-solution, shipping with all the tools and data required to allow hospital groups, managed care organizations, employer groups, and third party administrators (TPAs) to better operate in the competitive environment for delivering health care.

Maptitude is widely used by business intelligence analysts to improve the marketing, sales, and operations of health care organizations. To explore Maptitude further, see examples of mapping analytics and explore the locations of competitors and prospects. Read reviews from your peers in the industry to see how Maptitude is helping improve business decisions.

The dynamics of health and health care provision vary substantially across regions, and Maptitude allows you to map these differences in population density, age distribution, disease prevalence, race, ethnicity, poverty and the ability to access care. Maptitude includes the geocoding and geographic information system (GIS) tools that are critical in linking patient and population locations to local demographics to explore these relationships.

Wide use of the Maptitude GIS in health care supports research in the fields of public health, disease mapping, and epidemiology. Maps help to visualize health care information and enhance the understanding of the health care landscape. Maptitude mapping software enables users to find data about hospitals, health workers, at risk populations, and more:

Analyze populations and their healthcare accessibility.

Create epidemiology maps and find geographic patterns in your data. 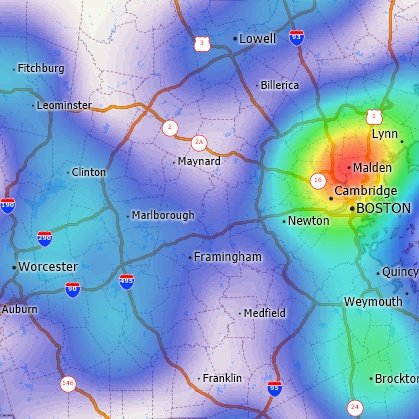 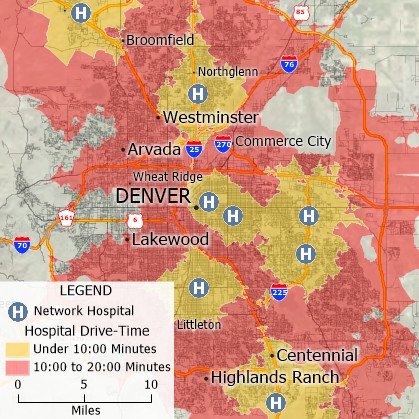 Perform hospital mapping and create territories based on drive-time or distance and look for gaps in service. 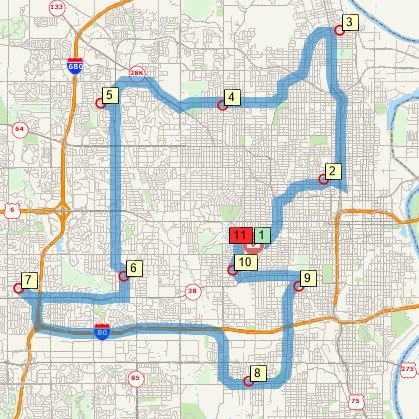 Maptitude makes it easy to use maps to analyze and understand the locations of doctors and patients, and can help explore the best location for a new clinic or office. Maptitude is a powerful combination of mapping software and geographic data that provides everything that you need to make informed decisions. Maptitude can help answer questions such as "Where Are My Patients?"

In addition to the latest demographics, Maptitude includes substantial social, housing, and income data, along with easy-to-use analysis tools that will allow you to better understand the relationships between the demand and supply of medical services.

For example, the Maptitude USA Data Package (other countries...) includes comprehensive hospital listing locations, and the number of health care and social assistance employees and establishments for every ZIP Code in the country. These data provide a complete framework for exploring care provider locations.

As costs of delivering health care continue to rise, providers and administrators must do all they can to maximize efficiency and minimize waste. With Maptitude's location-based data and tools, health care planners can select optimal sites to best serve patient populations, achieve equitable service provision, and maximize access to health care. 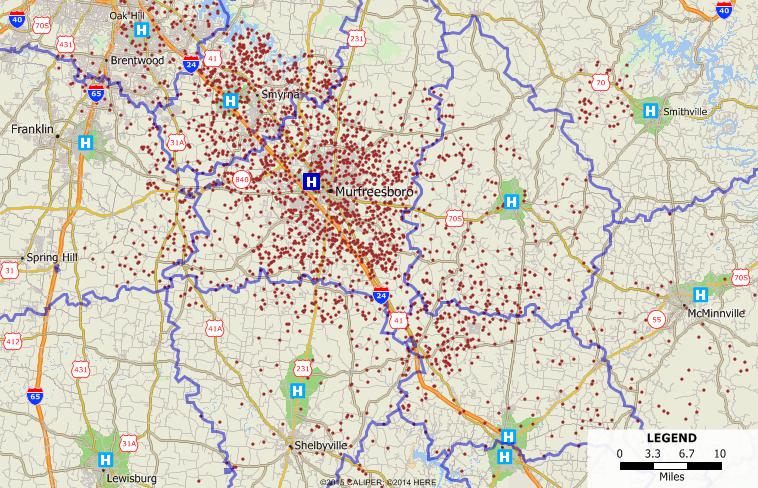 Maptitude is used in the assessment of unmet health needs which provide a basis for addressing the requirements of a hospital's implementation strategies (community benefit plan), ensuring it is aligned with community needs (see an example case study here).

Many health care organizations and pharmaceutical companies use Maptitude for target marketing, management, and territory planning. For example, using the Maptitude GIS, medical supplies and equipment can be visually located and inventoried. Linking the physical location and condition of equipment or supplies in a large facility or distributed medical campus is a powerful management tool.

Maptitude mapping software gives you a suite of tools for defining care network service areas and for address/postal geocoding and validation. Unlike many other mapping and GIS software that require users to purchase data separately, Maptitude includes extensive geographic and demographic data so that you can get started fine-tuning health care networks as soon as you open the box.

Maptitude includes one free Country Package of your choice. When you get the United States Country Package, you get demographic data from the state level all the way down to the Census Tract level. These data include population, income, and poverty variables, as well as fields describing the population with public, private, and no health coverage (both totals and by employment status), and the population with disabilities (by age group). See the U.S. Demographic Data tab on the United States Country Package page for more information.

There are many additional areas where Maptitude can help health care providers meet compliance requirements:

Maptitude can be used for health care mapping in many countries including the USA, Canada, UK, Australia, and in many additional locations (more data...).

Maptitude starts at only US$695 and is packaged as a one-stop-solution. Maptitude remains the most competitively priced professional health care mapping software available and is unique in the marketplace for the provision of comprehensive data and functionality in a single product for a single low price. 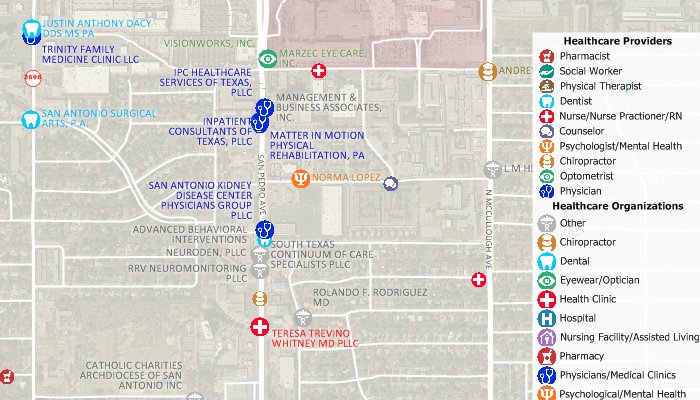 Download free data for use with Maptitude health mapping software.

There's no better health care mapping software at any price. Why spend more for less?